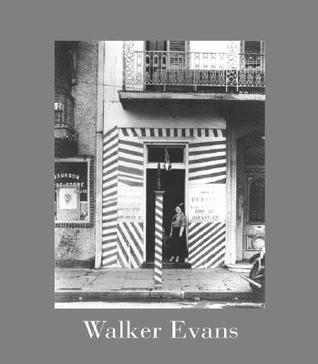 The large format volume Walker Evans is probably the best book on the photographer's work now available.  The copy I have is the hardcover edition originally published as a catalog to accompany an exhibit held at the Metropolitan Museum in 2000.  What distinguishes this work from the many other studies of Evans' photos - I posted several months ago a review of The Hungry Eye - is not only the high quality of the reproductions but also the insights provided in the well written essays that accompany the plates.

2013 marked the 75th anniversary of Evans' iconic American Photos, and the Museum of Modern Art celebrated by recreating the original 1938 exhibit in its entirety.  It was while attending that show this past summer that I began to renew my interest in Evans and to reexamine the influence his work had had on my own photography.  His subway portraits taken with a hidden camera in 1938, as published in Many are Called, had a profound impact on the hidden camera photos I took in Times Square in the early 1990's.

In any retrospective of Evans' work, one dismaying fact immediately becomes clear.  All the photographer's major work was completed in the first half of his life.  The images for American Photos as well as those in Let Us Now Praise Famous Men were shot between 1936 - 1938.  It was during this same brief period that Evans finished his work for the FSA and, with the assistance of Helen Levitt, created his subway portraits.  At this time, Evans was only 35 years old.  The remaining 37 years, until his death in 1975, were little more than a poignant postscript to his career.  Most of the second half of his life was spent working for Time and Fortune magazines, whose middle-American and capitalist viewpoints - as promulgated by their publisher Henry Luce - had previously been anathema to Evans.  I think it likely that this betrayal of his principles inhibited him greatly from creating authentic work on the level of that he had produced during the 1930's.

Evans is a difficult photographer to appreciate.  A failed writer who turned to photography only after he was unable to produce fiction, he was an intellectual who was often quite snobbish.  There is an irony to the fact that the man who produced so many great portraits of the poor, as in his work with writer James Agee, held himself so aloof from those about him.  His very choice of a camera allowed him to maintain a distance from those he photographed.  The view camera, his instrument of choice, effectively placed a wall between him and his subject.  Not only does the image appear reversed and upside down when viewed on the ground glass, it is blocked entirely when a film holder is placed in the camera.  Even when photographing the subway portraits with a handheld Contax camera, Evans shot "blind" by not framing his subject in the viewfinder before releasing the shutter.  There is always a sense, when viewing Evans' photos, that one is looking at them from a remove. There is no intimacy in them, only a cold hard precision.

The plates in this book are all full page reproductions and are of excellent quality.  Of the detailed essays, that entitled "The Cruel Radiance of What Is": Walker Evans and the South by Jeff L. Rosenheim, provides one of the best analyses of any photographer's work that I have come across.  It gives the reader a new and deeper understanding of Evans' accomplishments.
Posted by Frank McAdam at 8:42 AM No comments: