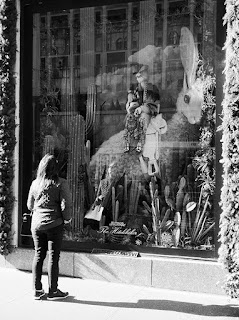 The problem with shooting department store Christmas windows in Manhattan is that there's always a line of mothers and children waiting to see them and little room to maneuver once one's time to move up finally arrives.  I took this shot on the run in November while passing Bergdorf Goodman.  A block below me everything was in chaos as NYPD and the Secret Service tried to decide how to best secure the length of Fifth Avenue that passes in front of Trump Tower.
Posted by Frank McAdam at 9:01 AM No comments:

Email ThisBlogThis!Share to TwitterShare to FacebookShare to Pinterest
Labels: Photographs 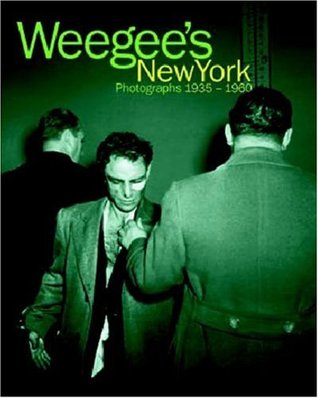 A quote by Walter Benjamin is used as an epigraph at the very beginning of Weegee's New York: Photographs 1935 - 1960.  In part, it reads:

"...is not every spot of our cities the scene of a crime?  every passerby a perpetrator?  Does not the photographer - descendant of augurers and haruspices - uncover guilt in his pictures?"

The quote is noteworthy for questioning the role played by news photographers such as Weegee.  After all, as becomes apparent when looking at these photos, he is not a mere bystander passively recording a violent moment he has accidentally stumbled upon; instead, by placing himself on the scene, he has willingly made himself a participant in the tableaux captured on film.  In the self portrait at the very end of the book (Plate 335), Weegee looks perfectly in place as he crouches behind his camera and stares almost defensively at the viewer from the back of a paddy wagon.  It is as though he were acknowledging that he belongs there just as much as the felons the vehicle is otherwise used to transport.

There is very little text in this monograph, only a four page introductory essay by John Coplans and little more than a page of biographical detail.  To a certain extent, that should be sufficient. A good photograph should always be able to stand on its own and require no explanation. Weegee's photos, though, were meant to accompany news stories that would provide a tabloid's reader with further information, no matter how sensational a form that reportage might take.  The absence of any details regarding the circumstances in which these photos were shot undeniably makes them more compelling, but at the same time the viewer is only getting half the story.  This omission can make the study of these images an unnecessarily frustrating experience.

The black & white photos themselves are well reproduced and each is placed by itself on a full oversized page.  They are not, however, grouped chronologically but rather by subject, for example "Coney Island Beach."  This makes it difficult to trace the development of Weegee's style over a period of time.  The problem is exacerbated by the fact that, although each photo is provided with a title (presumably supplied by Weegee himself), very few are dated.

In all, though, the book is highly recommended for providing a candid glimpse into the dark side of a big city in the mid-twentieth century.  No matter how horrifying the contents of his photos, Weegee never blinked when taking them.  He captured the ugliness of violent death and presented it in a straightforward manner with no trace of false sentimentality.
Posted by Frank McAdam at 8:57 AM No comments: 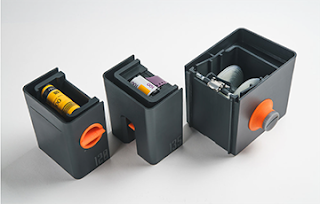 As digital photography continues its relentless drive forward, traditional photography has suffered accordingly.  Analog photographers have seen one film and paper after another discontinued as venerable companies such as Agfa have thrown in the towel and gone bankrupt.  Along with film products, services have disappeared as well.  Most of the custom film processing labs in New York City have by now gone out of business or else offer only digital services, thereby leaving photographers with no choice but to process their own film, often with mixed results.  It's heartening then to see the Lab Box Kickstarter project take wings.  It promises users the ability to simply and easily process 35mm and 120 film in a portable lightproof container that can be used in broad daylight.  I have no idea when full production will begin but the sponsors have already sold out their prototypes and, with almost a month left to run, have far surpassed their goal of $73, 636.  I definitely plan to buy a unit myself when it becomes available for ordering.
Posted by Frank McAdam at 9:00 AM No comments: