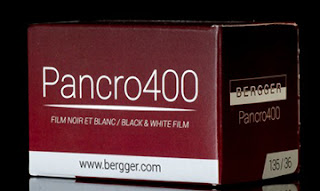 Last month, I blogged about the film revival that seems to be underway.  In that earlier post, I mentioned that Kodak is preparing to return the color reversal film Ektachrome to production and that an Australian company named Ikigai Camera was preparing to release a new film named Street Pan 400 that it claimed has many the same characteristics as the long discontinued Fuji Neopan 400.

Now Bergger, the company that once made the eponymous 200 film that had always been one of my favorites, has announced it will be offering a a black & white negative film called Pancro 400 in 35mm and 120 formats as well as in several sheet film sizes.  According to the information shown on Bergger's website, the new film will be composed of two sandwiched panchromatic emulsions, one silver bromide and one silver iodide, that together will provide a wide exposure latitude.  The website also features a number of photos shot with this film, all of which look great.

In the meantime, an Italian company, Film Ferrania, which I had honestly never before heard of, has announced the return of its flagship product Ferrania P30, another black & white negative film, this one with an ISO of 80.  The P30 was at one time, at least according to what I've read, a very highly regarded film; I can't vouch for its quality, however, since I never used it and moreover have no idea if the new film will have exactly the same properties as its discontinued predecessor.
Posted by Frank McAdam at 10:13 AM No comments: